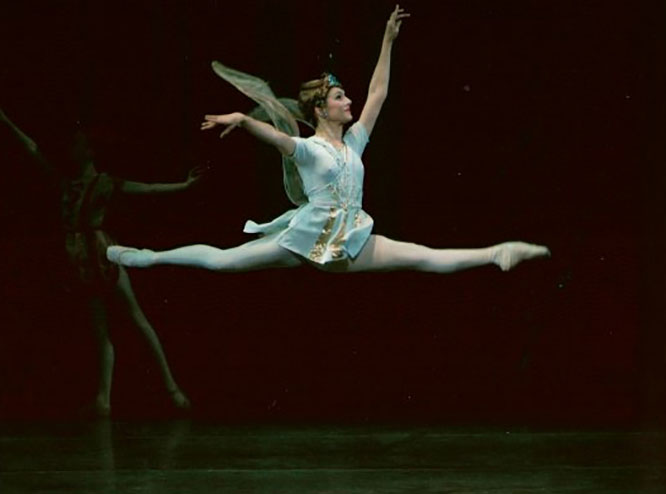 “If we shadows have offended,
Think but this, and all is mended,
That you have but slumber’d here
While these visions did appear.”
– Puck, A Midsummer Night’s Dream, William Shakespeare

I have a recurring dream. I’m backstage at Lincoln Center, standing in a leotard and tights, wearing a little bronze helmet of a headpiece with crystal antennae sprouting upward. I’m holding my pointe shoes, freshly sprayed a powdery blue as the shimmering overture of Mendelssohn’s A Midsummer Night’s Dream begins to waft up from the orchestra pit, slightly muffled from my place in the wings. Dozens of children dressed as bugs are perfectly poised in their places, waiting for the curtain to rise.

My heart pounds in my chest as I search frantically for Norma, who usually helps me into my butterfly wings. Just as I realize with despair that I won’t make it for my entrance in the opening scene, I wake up. I don’t have the dream often, but it always eventually finds its way back to me.

I strove to embody Shakespeare’s charming language, “Every elf and fairy sprite hop as light as bird from brier.”

I’ve long been enchanted by winged creatures: owls and fairies, fireflies and angels, dragonflies and dragons. I love (and believe in) them all! Dancing — at its best moments — is like flying, and the role of the butterfly in Balanchine’s A Midsummer Night’s Dream was one of my favorites to perform. The dark and dappled forest scenes I shared with the eager young ladybugs and grasshoppers had an otherworldly atmosphere. The children’s wonderment fed my energy, and as the older “insect,” I felt responsible for leading them with fluttering authority.

Shakespeare’s brilliant comedic tale offered a wonderful opportunity to embrace my character. In my mind, I was an accomplice to the escapades being orchestrated by Oberon, carried out (somewhat haphazardly) by his assistant, Puck. The delightful music, the mystical sets, and the playful plot helped me to ignore one drawback: my wings. They appeared light and ethereal, a gossamer extension of myself, and I strove to embody Shakespeare’s charming language, “Every elf and fairy sprite hop as light as bird from brier.”

The reality, however, is that dancing in them felt like trying to execute lofty jumps and precise turns while wearing a bulky backpack! 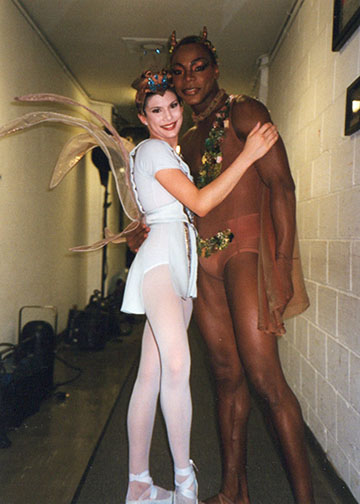 In addition to the annual weeklong run of the production at the end of New York City Ballet’s spring season in the city, we often presented it in the ideal setting: the open-air amphitheater in Saratoga Springs, New York, the company’s summer home. As dusk approached and twilight began to descend, so did the mosquitoes and the occasional bat! But, with chirping crickets, warm breezes, and fireflies blinking among the spectators sitting beneath shadowy pine trees, it took little imagination to feel a part of Shakespeare’s fantastical world.

But, with chirping crickets, warm breezes, and fireflies blinking … it took little imagination to feel a part of Shakespeare’s fantastical world.

Alan Hineline is currently creating his version of Shakespeare’s A Midsummer Night’s Dream on Central Pennsylvania Youth Ballet’s extraordinary students. He is designing new scenes, and crafting choreography that highlights the dancers’ individual qualities and unique personalities. It is already clear that audiences are in for a transporting experience.

Mismatched lovers and elegant fairies, adorable bugs and, of course, a shimmering butterfly; it’s going to be a dream to remember!

Amanda Edge is on the faculty at Central Pennsylvania Youth Ballet. During her professional dancing career – at New York City Ballet and on Broadway – she attended Fordham University, where she discovered a fondness for writing. She works as a répétiteur for The George Balanchine Trust staging a number of George Balanchine works.