Yuri Zhukov: Out From The Frozen Tundra. Into The Studios!

Yuri Zhukov, Central Pennsylvania Youth Ballet’s second Artist in Residence, was initially held up in Cleveland in early January en route to Carlisle. He braved two days in that frozen tundra experiencing their balmy 7⁰ highs and chilly -8⁰ lows. Yuri has since arrived, thawed out and been hard at work in the CPYB studios.

Yuri Zhukov began his ballet training at the Vaganova Ballet Academy in Russia. During his performing years he danced professionally at The Kirov Ballet, The San Francisco Ballet, and The Birmingham Royal Ballet. He is also noted as an accomplished painter, a set designer and an aspiring actor. Man of many talents I’d say!

Quoted as saying that he was tired of being the ‘prince’, Yuri launched his own (and very successful I might add!) contemporary dance company – Zhukov Dance Theatre. The dancers in his company are known for their refined classical ballet technique, which helps them fearlessly execute the edgier choreography that Yuri has created for them.

Now, I have just noted two phrases that tie this all back to CPYB and its students – refined classical technique and fearlessly execute. I see it every time that I peek into the studios! The students are excited to have a ballet master like Yuri Zhukov in the studio with them as he helps them further develop that technical and fearless foundation.

The Artist in Residence program marks Yuri Zhukov’s second time teaching for CPYB, although a first teaching the year-round students. Let’s take a deeper look into Yuri’s thoughts and his own plans for while he is here.

Creating Your Own Choreographic Language 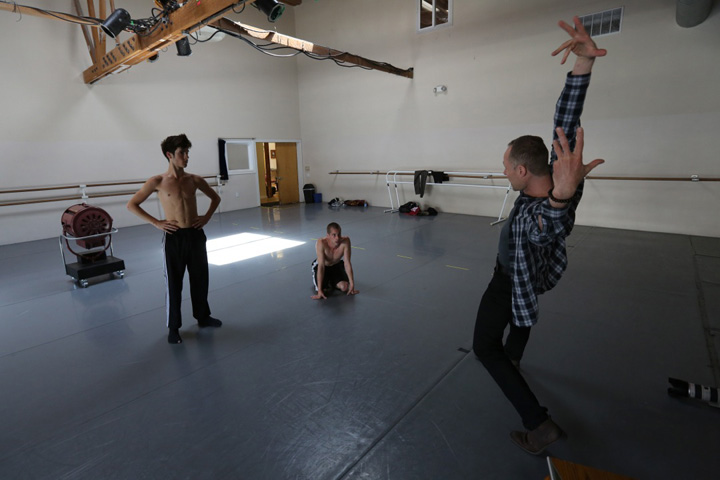 A New Page: How have your views of the dance world changed as your career has taken you from such classicism to having your own contemporary dance company?

Yuri Zhukov: From the time when I was a very young dancer, I was attracted to innovation in dance (even though I didn’t really know the meaning of those words back then). In comparison to the schooling I received and the way I had to dance for years, something new and different became much more interesting and magical to me.

At first it was Balanchine’s works that were a mystery to all of us in Soviet Russia as they were prohibited by the Soviets for quite a long time. Then Jiri Kylian became one of the greatest inspirations to me after I saw Nederlands Dans Theater on tour in St. Petersburg. Then it was William Forsythe’s New Sleep that I saw when I joined San Francisco Ballet. These choreographers, and many others, proved that creating your own choreographic language with new ways of expression is more interesting and challenging than dancing the sometimes overdone classics.

ANP: The demands in the dance industry are ever changing and seem more challenging than ever. What is the one thing you see changing? How are you helping prepare the next generation of dancers for that change?

YZ: One thing that is happening for sure is progression in virtuosity – more pirouettes, spectacular jumps, finer coordination all at a younger age. Because I don’t teach on a regular basis, therefore not responsible for their achievements in technique, my goal is to introduce my students to an individual way of thinking. This includes exposing them to how dance can be expressed and interpreted differently. They must understand their own body and gain a clear image of who they want to be as an artist.

ANP: You, without a doubt, have left your mark on the dance world. You continue to do so through your choreography. What impact would you like to make on the students here at CPYB?

YZ: Well … I am not sure I have made my mark just yet. But, hopefully, my constant work in the art form that I truly love will make something happen.

To answer the second half of your question, I think that I would go back to what I said earlier – virtuosity, an individual way of thinking, expression, and interpretation. Other than that, CPYB students are a great bunch of people – dedicated and disciplined. Working with them is simply a joy.

Writer’s Note: When asked what he thought about his travels to Carlisle, Yuri responded, “Perfect! I was hoping for some cold and snow.” He got it!